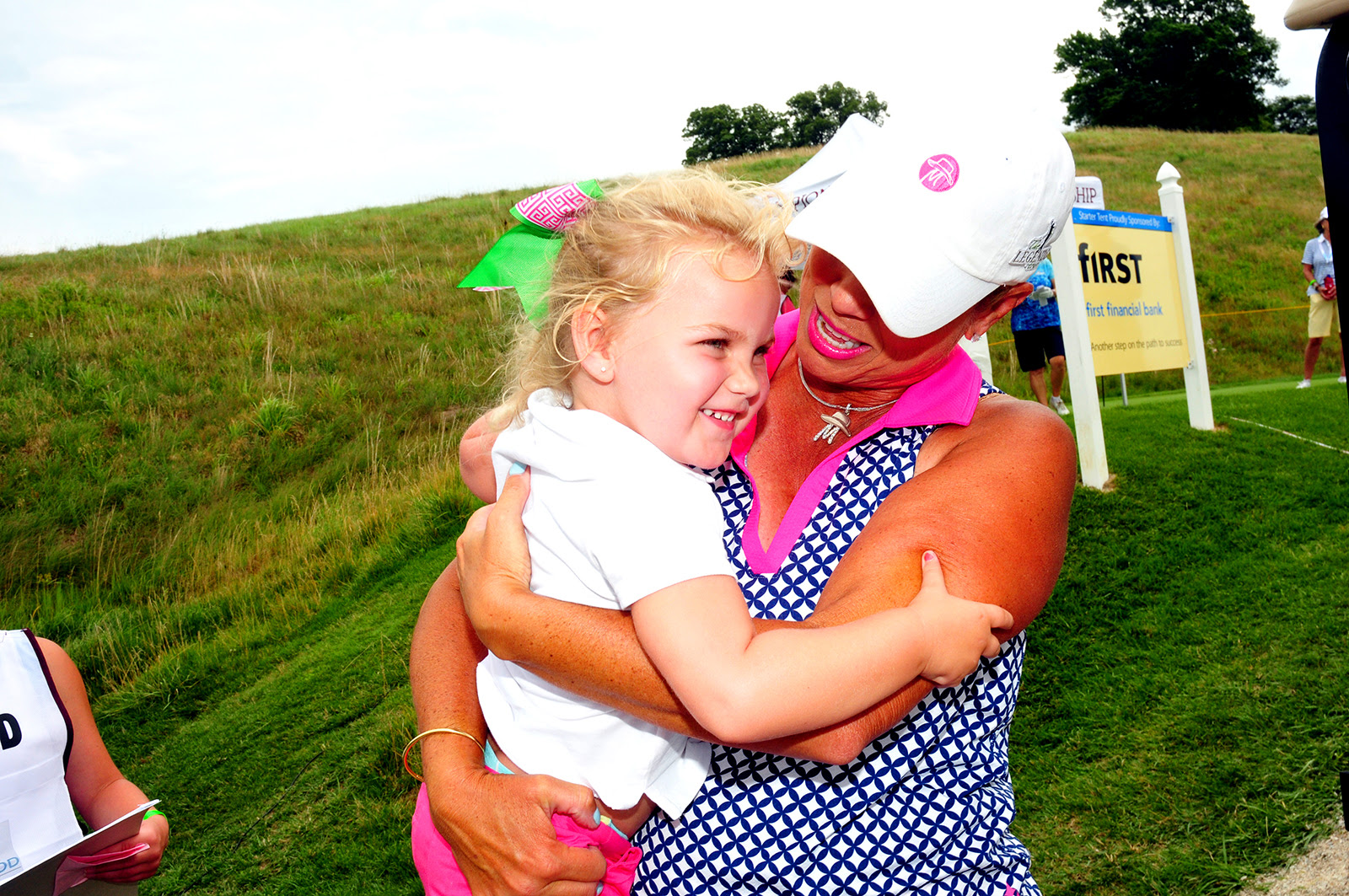 French Lick, IN – When it comes to charitable giving, golf has long been recognized as the most prolific supporter among all professional sports in the United States. The $3 billion-plus professional golf has presented to worthy causes is a humbling figure, but the real inspiration comes in meeting the beneficiaries of such support. At the Senior LPGA Championship at French Lick Resort, which will be held for the third consecutive year this week Oct. 14 – 16, a special legacy is being built between the tournament, the resort, the community and the families of the benefitting charity, the Riley Hospital for Children.

The Senior LPGA Championship presented by Old National Bank will be contested on the Pete Dye Course at French Lick Resort in French Lick, Indiana. The field of 78 players include, members of the World Golf Hall of Fame, Major Champions, and past LPGA stars over the age of 45 who will compete in the 54-hole Major Championship.

During this tournament week, there’s a palpable air of competition. It’s a senior women’s major championship, after all. However, the prevailing sense of camaraderie and community is stoked by the presence of the nearly two dozen Riley Kids (patients and former patients of the hospital) who are invited to partake in the week’s festivities with their families. Some of the Riley Kids have the opportunity to announce the pros on the first tee during the golf tournament, others share their stories at the Pro-Am pairings party, others get the chance to caddie for players or just meet and socialize with the legends of the women’s game.

So, while defending champion Laura Davies eyes up her shot at a repeat and a full field of 45-and-older pros chase her down for a share of the $600,000 prize purse, there’s still a fun-spirited levity to this event. There’s also a clear appreciation for the support French Lick Resort has committed to the Riley Children’s Foundation over the past five years, which is expected to surpass $1 million at this year’s event.

“French Lick Resort has been an amazing champion of the Riley Children’s Foundation. Making these brave kids and their families a focal point during the Senior LPGA has provided immeasurable inspiration and a deeper connection with the fans and community,” says Brad Moritz, senior corporate gift officer for Riley Hospital for Children. “The Riley Kids and their families are treated like royalty when they’re at that incredible resort and their gratitude and positive attitudes leave a lasting impression on everyone they meet.”

Three-time cancer survivor and former Indianapolis University golfer Ashtyn Brown, who has worked in television production and now has her sights on studying to become a radiologist, has been on hand at previous Senior LPGA Championships and is expected to hit the ceremonial first shot at this year’s tournament.

Last year, Indiana native and the oldest-known living Riley Kid, Genevieve Bennett Slater was on hand to introduce the players at the first tee. Now 92 years old, Slater was a Riley patient between the ages of five and 16, when she had multiple surgeries to avert a birth defect.

“The patients and their families get to be a part of something special and the people they meet walk away with a deep, unforgettable appreciation for the work the Riley Hospital for Children does for so many children in our Indiana communities and beyond,” says Joe Vezzoso, vice president of sales for French Lick Resort.

Having hosted one of the first LPGA events in 1957 and the LPGA Championship in 1959 and 1960, it’s fitting that that French Lick continues that legacy by hosting the Senior LPGA Championship. French Lick Resort director of golf Dave Harner, who, along with Cook Group chairman of the board Steve Ferguson and the LPGA’s Jane Blalock was instrumental in bringing professional women’s golf back to French Lick, say he and his team are committed to giving the LPGA golfers who paved the way for today’s tour the recognition they’ve earned. “They deserve a place to play and compete and the reaction and participation from these legends of the game has been tremendous,” Harner says.

For the players, the chance to meet the beneficiaries of the tournament’s designated charity face-to-face is always impactful. LPGA player president Vicki Goetze-Ackerman, who will again be competing in this year’s tournament, had the chance to visit the Riley Hospital for Children a in September along with a team of French Lick staffers and LPGA officials and saw the incredible quality of life and care administered there.

“I continue to be humbled by everything Riley does for these kids and their families. We got to see the Child Life amenities and activities which allows the patients to play game, create art and take part in activities that give them relief from the grind of their treatment,” Goetze-Ackerman says. “They even had a putting course set up on the lawn. Everyone was all smiles. Their spirits and attitudes just amaze me.”

Goetze-Ackerman has developed a bond with a Riley Kid she met at breakfast prior to last year’s Pro-Am round, 14-year-old Evan Noble, who is the same age as her son, Jake. Noble caddied for two-time U.S. Women’s Amateur champion and helped calm her nerves in her first competitive round in more than a decade.

“To the gallery, it probably looked like we were doing something special for him, but the truth is that he was my angel. Putting my focus on his experience and making sure he was enjoying his time out there helped me settle in and not worry about how rusty my game was,” says Goetze-Ackerman. “As a parent, meeting these kids puts a lot into perspective and makes us appreciative a hospital like Riley is giving the best quality care and doing breakthrough research.”

Founded in 1924, the Riley Hospital impacts all 92 counties in Indiana and is Indiana’s only comprehensive pediatric research hospital, with expert physicians in every pediatric specialty handling more than 300,000 patient visits per year. Riley is among the top pediatric research hospitals in the nation, thanks to its partnership with the Indiana University School of Medicine. Riley researchers are working on new treatments and cures for a wide variety of childhood illnesses including: cancer; heart defects; neurological disorders; asthma; cystic fibrosis; and diabetes.

The funds raised from the Senior LPGA Championship at French Lick Resort are earmarked for direct patient care.

‘I think this tournament will continue to grow in stature and will lead to more playing opportunities for the game’s past champions,” Harner says. “We also look forward to growing our partnership with Riley.”

Follow the Senior LPGA Championship Presented by Old National Bank, live from French Lick Resort on its television home, Golf Channel, and on the web via www.LPGA.com. Join the social conversation at www.facebook.com/lpga, www.twitter.com/lpga and www.youtube.com/lpgavideo, and on Instagram and Snapchat at @lpga_tour.